If you have been watching soccer for at least a year, then you might have noticed that soccer teams change their jerseys almost every season.

Usually, the colors on the main team’s jerseys are maintained because they are part of the team’s brand. However, these colors are used in a different way each year.

Big Soccer clubs and the manufacturers that sign deals with them sell millions of jerseys each year. If a club keeps using the same jersey design each year, then the sales will definitely go down because the jerseys that people buy won’t be outdated after only a year so they won’t buy new ones.

Here are the jersey sales of some of the biggest soccer clubs around the world in the season 2018/2019 alone. 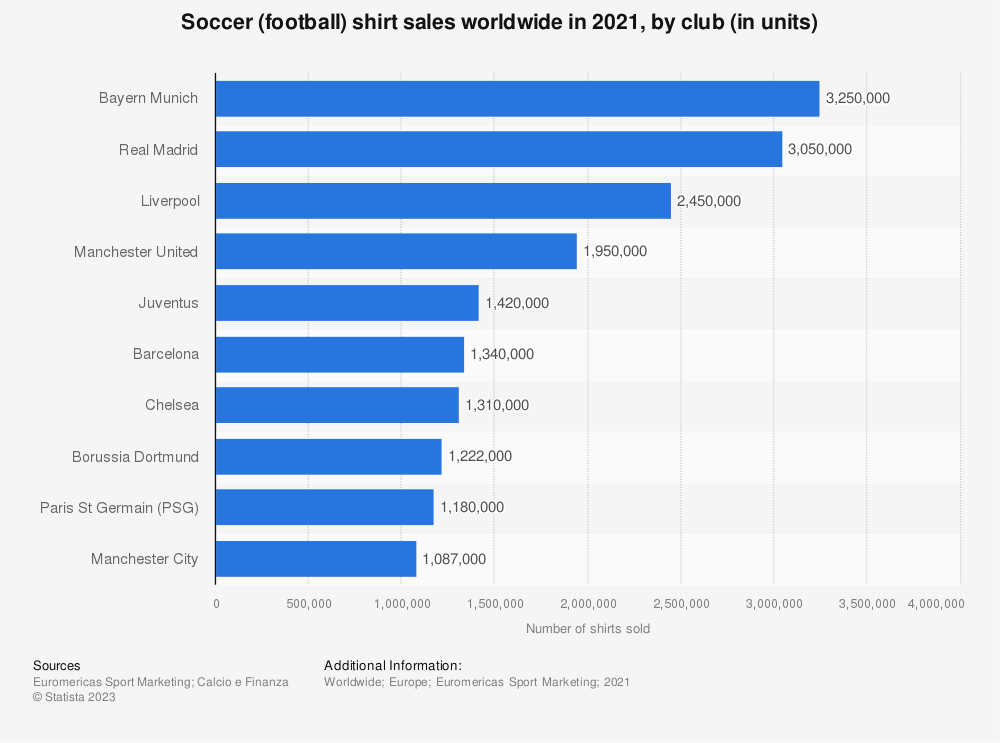 Usually, the club only gets a small percentage of the actual sales of these jerseys while the manufacturer gets the bulk amount of money.

How many different jerseys do soccer teams change each year?

Soccer clubs have up to 3 different jerseys for each season. The clubs are required to have 2 jerseys of completely different colors to make sure that they can resolve the color conflict with the jerseys of the opponent team.

For example, if 2 soccer teams who are playing against each other have the same color jerseys, then one of the teams have to use their other jersey during the match. Usually, the team who’s playing on their home field wears their main jersey while the other team wears their second jersey.

Every year, most big soccer clubs change their main jersey design while maintaining the brand colors, but they completely change their second jersey and their third jersey.

Second jerseys of soccer teams might have completely different colors each year. These jerseys aren’t used as often as the main jersey though.

In case you’re wondering, why 3 jerseys instead of only 2? Well here’s why.

It’s true that a 3rd jersey brings in more money as die hard fans will definitely buy it every year, the 3rd jersey can sometimes be useful for other things too.

There have been some occasions in which all of the combinations of the first and second jerseys of the 2 competing teams clash together and can’t be distinguished properly from each other.

Under his scenario, the third kit is used. Third kits are not new to soccer at all. They have been used since more than 80 years ago.

However, fans didn’t see their clubs wearing the third jerseys a lot since they weren’t needed most of the time.

But, more and more soccer clubs are trying to use their third jersey whenever they get the chance to in order to make sure that the fans see the third jersey in action. This brings in more jersey sales for both the soccer clubs and the jersey manufacturers.

Soccer clubs change the designs of their jerseys every year in order to bring in more revenue for themselves and for the jersey manufacturer. Each soccer club has up to 3 jerseys that change almost every year and the usage of these jerseys depends on the colors of the jerseys of the opponent team.