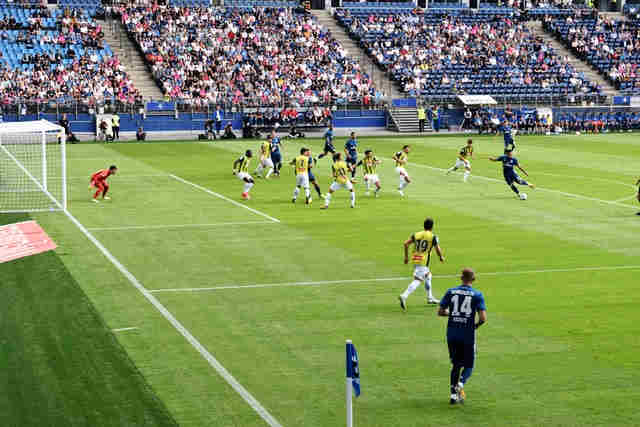 You can ask any soccer fan about what the penalty area in soccer is used for, and they will most probably give you your answer, but when it comes to the goal area (aka the goal box, aka the 6-yard box) they might not always have the full answer for you.

So, if you’re here for the full answer about what the goal area is and what it is used for, then you’ve come to the right place.

What is the goal area / box area?

But why is the goal area a thing? Well, the goal area has a number of purposes, and all of them involve making sure that the goalkeeper and the other players of the defending team are given enough room to act during a set piece.

So the goal area might not be as popular and well talked about as the penalty area, but that doesn’t mean that it isn’t useful.

The rest of this article will be explaining each of the roles of the goal area in detail.

What is the purpose of the goal area?

There are 3 main rules that involve the goal area during a soccer match. Some of them are used in nearly every professional soccer game, while others might rarely be seen by even many hard core soccer fans.

With that said, here are the main 3 goal area related rules in soccer:

1- Goal kicks are required to be taken from inside the goal area.

This is one of the most well known rules that involve the goal area, since goal kicks are extremely common during a soccer game.

In simple words, whenever a team wins a goal kick, the player who takes the kick has to place the ball anywhere inside the goal area or on the goal area line if they want to, but they can’t take the goal kick from outside of the goal area.

On a side note, any player on the team can take the goal kick and not just the goalkeepers, as long as this player follows the goal area rule.

2- Indirect free kicks can’t be taken from inside the goal area of the opponent.

This is where it gets rare. This scenario rarely happens in soccer, but if it does, there’s a rule for it.

So here are the details:

It is well known that if a player commits a foul inside the penalty area of their team, then the opponent team wins a penalty kick.

However, it is less known that fouls inside the penalty areas can also reward indirect free kicks to the opponent instead of a penalty kick.

For example, the referee can give the opponent an indirect free kick if the goalkeeper touches the ball with their hand after it gets passed to them by one of their teammates.

There are other scenarios that can make the referee award an indirect free kick instead of a penalty, but these aren’t our concern for now.

Specifically, the ball will be placed on the nearest point from the foul position to the goal area line.

So to sum this whole thing up, indirect free kicks for the attacking team can’t be taken from inside the goal area of the defending team.

In other words, all free kicks have to be taken from a place that is at least 6 yards away from the opponent’s goal.

3- Free kicks for the defensive team inside their goal area.

This rule is put in place to make sure that whoever is taking the free kick has enough space to do so.

For example, let’s say that the defending team has won a foul exactly in front of one of the goal posts. If the player taking the kick was forced to take it from where the foul took place, then the goal post will be in their way and it will be hard for them to perform the kick.

To give them enough space, the laws of the game allow them to place the ball wherever they want inside the goal area if the foul took place inside this same area.

If you’re interested in learning more about other less popular marks on the soccer field, then you can check this article that explains what the penalty arc (The D) is and what it is used for.