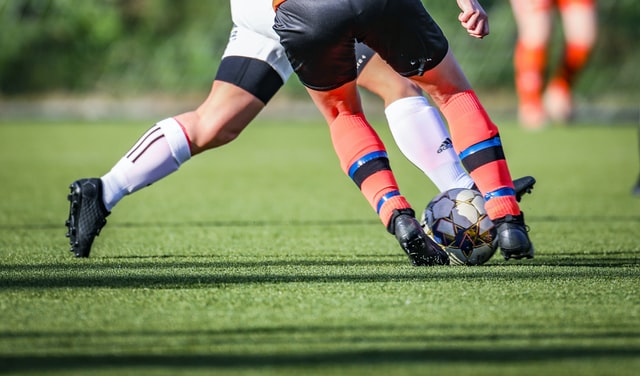 The wall pass, which is also known as the 1-2 pass, is one of the most common types of passes a soccer player can use.

I used this pass all the time during my time playing soccer on the streets, probably more than I should have.

The wall pass is very simple yet very effective if executed at the right moment, and it can help you beat the defender in front of you with minimal effort. But what is it exactly? And how does it work?

What is a soccer wall pass?

The wall pass is a type of pass that allows a player to surpass the defender in front of them by passing the ball to a teammate and then receiving it back after running past the defender. The wall pass is extremely effective and is used by professional soccer players in almost every soccer game.

Here is an illustration of how it works:

Why is it called a wall pass?

The name “wall pass” comes from the fact that you are using your friend as a wall. If you kick the ball towards the wall, the ball bounces back towards you (who would have thought right?). It’s as if the wall has passed the ball back to you.

However, since you don’t have the luxury of kicking the ball towards a wall and getting it back during a professional soccer match, you can replace the wall with a teammate and make them pass the ball back to you in the direction you’re moving in.

That’s the reasoning behind the name. I would say that’s a good name for a pass.

If you’re here just to learn about what the wall pass is, then I am hoping that you got your answer, but if you would like to learn more about the details of how it’s done and when it’s done, then this article has a lot more for you so stick around.

How to do a wall pass in soccer?

There are 2 players involved when doing a wall pass. The first player is the one initiating the pass, and the second player is the player passing the ball back.

If you’re the player who is initiating the wall pass, here is what you need to do:

1- Pass the ball either exactly where your teammate is (if they are standing still), or slightly in front of them so that it reaches them on time if they are moving forward.

What you need to do is avoid passing it to somewhere behind them, because that will require them to reverse their movement which can delay the execution of the pass from their side.

If you know which foot your teammate is more comfortable with, you can also use that to your advantage by passing the ball towards that foot. That might eliminate the need for your teammate to trap the ball, which results in a quicker response from them.

You also want to make sure that the pass isn’t too slow to avoid giving the opponent too much time to react, and you also need to make sure it’s not extremely fast to the point that it makes it hard for your teammate to handle the ball.

Finding the right balance requires a little bit of practice.

2- The moment you make the pass to your teammate, immediately run past the defender that you are trying to surpass. The defender will be torn between having to follow you, and having to run towards your teammate because that’s where the ball is.

The whole point of the wall pass is to surpass the opponent in front of you, or it would just turn into regular passing between you and your teammate.

So make the pass, run forward, and then prepare yourself to receive the pass.

But what about the teammate who is passing the ball back?

If you are the teammate who is passing the ball back during a wall pass, here is what you need to to:

1- immediately notice when your teammate is trying to initiate a 1-2 pass (wall pass), and position yourself in a way that makes it easy for you to pass the ball back immediately when your friend gets into the desired position they want to be in.

As you build chemistry with your teammates, you should be able to read the game better and predict when one of your teammates might want to do the wall pass.

2- Once you receive the ball from your teammate, assess the situation. If your teammate made their run to an open space, pass the ball towards them and make sure to pass it in front of them so that you don’t force them to reduce their speed or wait for the ball for too long.

However, if you think that your teammate might not be able to receive the ball well, either because they are being covered by another defender or because they didn’t get into a good position, then you can decide to halt the wall pass and instead keep the ball with you.

It’s better to halt the wall pass attempt if you think it’s gonna fail because if you go for it anyways, you will be risking losing the ball.

That concludes the basics of what you might need to know when it comes to the wall pass. If you are interested, here are some other articles that you might find useful: